Doumar’s Drive Major Word of Mouth With Their BBQ, Ice Cream, and Story

This Week, with summer heating up. We’ll be discussing who invited the ice cream cone, and where you can still try this 104-year-old recipe, at Doumar’s. 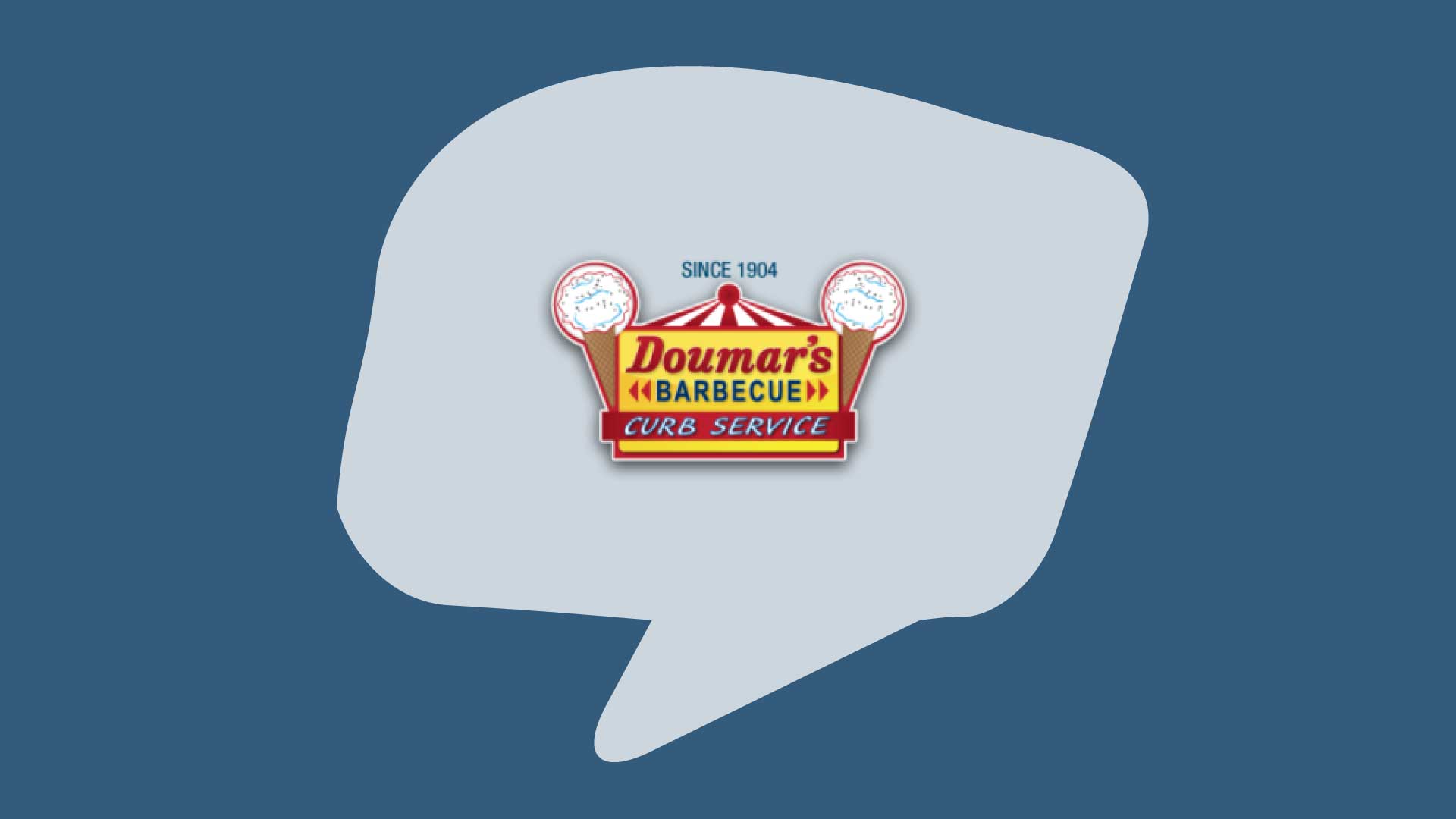 This Week, with summer heating up. We’ll be discussing who invented the ice cream cone, and where you can still try this 104-year-old recipe, at Doumar’s. Here’s how this brand creates word of mouth in the foodservice market.

What is Doumar’s and what do they do?

Doumar’s is a historic Hampton Roads, VA landmark. Serving up some of the best pulled-pork barbecue, fresh-made limeade, and home-made ice cream cones, since 1934.

Doumar’s is all about community, with many of their patrons visiting their establishment for over 50 years. Their customer base spans generations, almost as a right of passage. Stop in any weekend, and you’ll often find couples celebrating anniversaries, football teams having a victory dinner, or families treating their little ones to their first homemade ice cream cone.

What people are saying about Doumar’s

Although the menu has expanded since 1907 to include many more family favorites, from cheeseburgers to banana splits, Doumar’s still carries on the tradition of creating handmade waffle cones and ice cream. In fact, Doumar’s waffle cones are still made with the same recipe and waffle cone machine built by Abe Doumar.

This dedication to family tradition has caught the eye of some major players in the food industry, such as Rachel Ray and Guy Fieri from the Food Networks “Diners, Drive-ins and Dives.”  Who had nothing but praise for their one of a kind dessert, labeling Doumar’s as a must for anyone visiting Hampton Roads.

Let’s put it this way if you stop someone on the street in Norfolk and ask, “Where’s Doumar’s?” and they don’t know, you’re probably dealing with a tourist.

At the 1904 World’s Fair held in St. Louis, Missouri. Abe Doumar, a traveling salesman, was struck by inspiration one night while selling paperweights to fairgoers. He noticed that an ice cream stand had to close early after running out of paper dishes. Nearby, another stand was cooking up waffles on a single-iron waffle marker and selling his creation with a dollop of whip cream.

On a whim, Abe bought a fresh waffle and rolled it into a cone and topped it off with a scoop of ice cream. Thus the invention of the world’s first ice cream cone!

With his inspiration from the World Fair, Abe built a four-iron waffle machine that is still in use to this day — allowing Abe to roll a waffle while three others cooked. In 1905, Abe opened his first Doumar’s ice cream stand which quickly became a chain of Doumar’s stretching from Coney Island to Jacksonville, Florida. Two years later, Abe and his brother George arrived in Norfolk, VA to open a stand in the Ocean View Amusement Park, the most popular oceanfront destination in the south until Miami Beach was constructed in 1925. This location quickly became the most successful of all the Doumar family’s stands, selling nearly 23,000 cones a day during peak season.

After the hurricane of 1933 destroyed much of Ocean View Park, Abe’s brother George reopened Doumar’s at their current location on Monticello Avenue in 1934. To keep their business running year-round, the brothers added classic sandwiched to the menu and began curb service that Doumar’s customers still enjoy today.

How Doumar’s grows through word of mouth with Story

(See all of our word-of-mouth strategies.)

If you’re ever so lucky to visit Doumar’s, you’ll find dozens of old pictures hanging on the walls. From Abe Doumar standing beside his first-ever ice cream stand to pictures of WWII vets enjoying a bit to eat minutes after arriving back home from deployment.

Albert Doumar, the great-nephew of Abe Doumar and the current manager of Doumar’s, explained that people want substance where they eat. They enjoy looking at the photos and traveling back in time to a different era where people were enjoying the same great food in the very same booth.

Eating somewhere that has history and a great story only enhances the customers’ experience and helps shape their own special memories.

Overall they receive a 4/5 in our word of mouth scale, which equates to “You will tell friends about the product/business when it comes up in conversation.”

Unless you’re planning a trip to Hampton Roads or you have visited Norfolk, VA. There’s very little chance you’ve ever heard of Doumar’s. You would think with the popularity of the ice cream cone, Doumar would be a household name, but this unique restaurant that almost seems suspended in time still relies on word of mouth for all their business. Their only source of advertising is a single billboard two miles down the road on Monticello.

The next time you enjoy a refreshing ice cream cone, take a second and think the granddaddy of it all, Abe Doumar.