How Threadless Gives Every Customer A Voice And Style 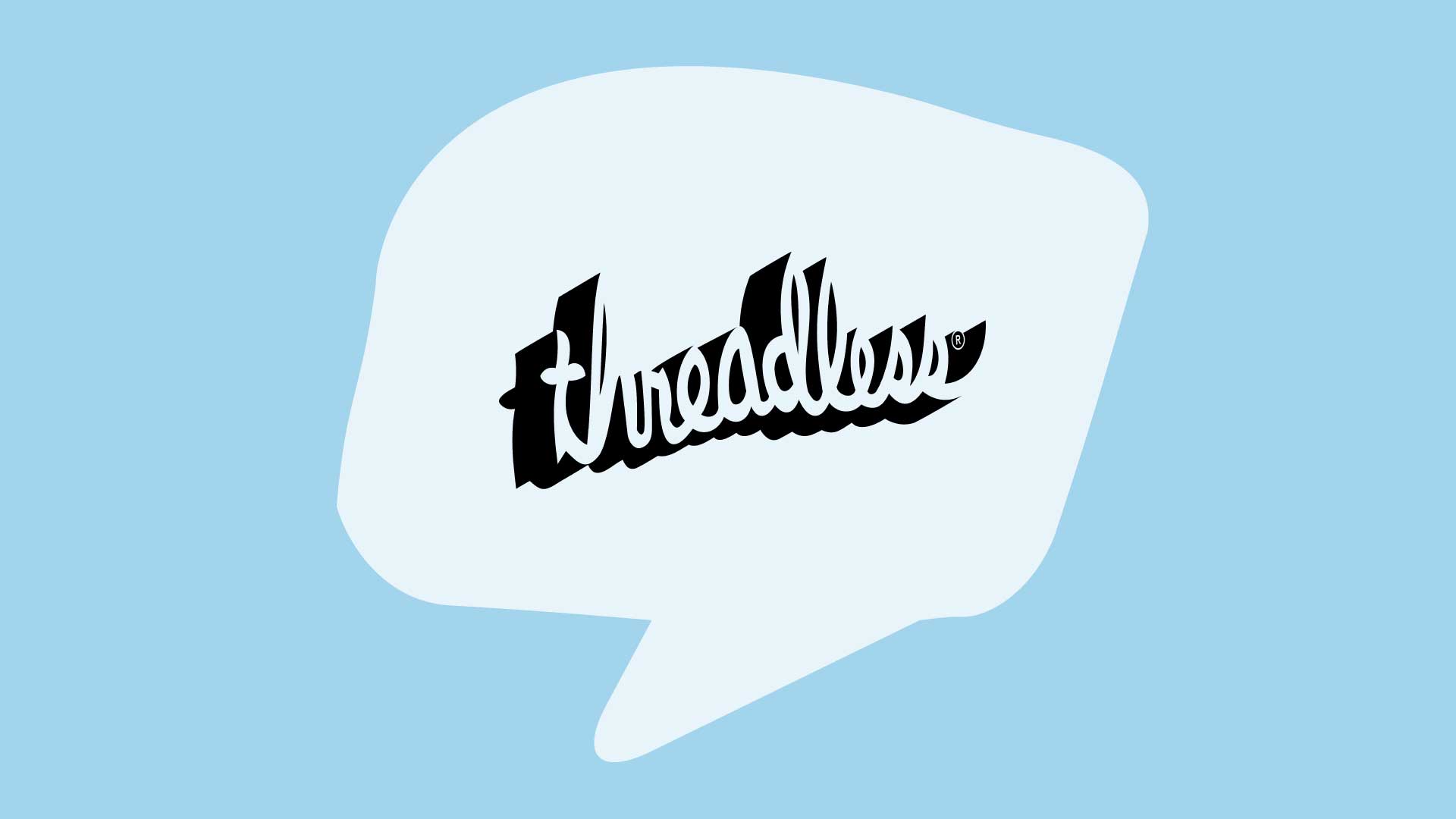 Since the dawn of fashion, it’s always been who you wear, not what you wear. But one company has changed that forever by giving local-artists and everyday people a platform to express themselves. Learn how Threadless uses “product” and their community to drive word of mouth through unique designs.

What is Threadless, and what do they do?

Threadless allows you to wear art every day.

Sure, if we want to keep it simple, Threadless is a Chicago based graphic design t-shirt company. But it’s much more than that.

Threadless’s designs are created and chosen by its online community. Anyone can submit a design to their weekly contests, which are then voted on for ten days by other people in the community. Once all the votes are in, the designs receive a score from 1-5. The score is used as a gauge to see which designs get turned into t-shirts. And which artists get a pat on the back.

Each week Threadless chooses around ten winners. Each design is then printed and the designer scores commission off of every t-shirt sold.

Now you might be thinking this sounds a lot like crowdsourcing, and you would be correct to think that, but this crowdsourcing engine runs purely off of word of mouth.

What people say about Threadless

Being a community-based platform, you won’t find too many bad reviews or reviews in general. Over the past 19 years that Threadless has been in business, they have been the poster child of a successful crowdsourcing company. But with their international expansion and adventures into new markets. Some loyal customers have begun to complain about the quality of their t-shirts.

But that doesn’t stop millions of users from voting on cool new designs every week. After all, who doesn’t enjoy being a critic?

How Threadless got started

Back in 2000, Jake Nickell (founder of Threadless) found himself living in a tiny one-bedroom apartment in Chicago’s Buena Park. An army brat who was always moving from base to base as a child, he found he had few friends in town. He would spend most of his days working as a sales rep at CompUSA, and studying design at the Illinois Institute of Art, at night.

Nickell, bored and with plenty of time on his hands, started scrolling through countless design forums and blogs looking for inspiration. Nickell soon found his muse in Dreamless, a blog for artists and in their forum, he found his community. They would spend hours discussing the latest trends and playing Photoshop Tennis for fun. A game in which you challenge others to manipulate an image in the most outlandish way.

That year, Dreamless was planning their annual “New Media Underground Festival.” To help spread the word, they decided to hold an online t-shirt design competition. Nickell spent a day or two on an original design and won.

Excited, Nickell waited anxiously for his shirt to arrive, but a few weeks past and nothing happened. No t-shirt, no prize money, no communication at all. Dissatisfied, he went back to Dreamless’s community and proposed that he would hold a contest and the best shirts will actually get made.

Nickell used $500 of his own money to get the contest rolling. Around this time another Dreamless enthusiast Jacob DeHart fell in love with the concept and matched it. The pair held their first competition on Dreamless in November 2000. Asking, fellow community members to submit original designs and to vote on their favorites.

Playing off of the community’s name, they decided to call the contest Threadless.

The duo received fewer than 100 submissions and selected five winners. Keeping true to their word, the winners each received two free t-shirts with their design printed on the front. Seeing an opportunity, Nickell and Dehart used their extra contest funds to print more shirts. Two dozens each to be precise and offered them to other Dreamless user for $12 a pop.

So a few years passed and Threadless had become a staple in the Dreamless community with users designing and voting on new work each week. It was around this time, the team realized they might have a real business on their hands, and in 2002 they both dropped out of school to pursue Threadless.

Their first big move was starting a massive word of mouth campaign, not being a huge fan of ads. Nickell kicked it old school and started spending the majority of his time scanning the web, posting comments on different forums, and replying back to Threadless users. Who in turn promoted Threadless’s weekly contests to their friends and family. Remember this was before social media.

In the beginning, some people submitting designs objected to the fact that Threadless retains the apparel rights to all winning images and pays relatively little for them. At the time a winning image would land the designer $2,000 for the licensing rights, plus their choice of either $500 in Threadless credit or $200 cash. But most artists felt that the exposure to their work was worth it.

How Threadless grows through word of mouth with Product

Most crowdsourcing ideas start with the classic chicken and egg scenario. On the one hand, you need a broad engaged audience, and on the other, you need plenty of people willing to submit work and pay money.

Threadless piggybacked off of Dreamless’s forum, where they used their established platform to build a community. Much like how people use social media to create groups today.

Casually scrolling through their comments and submissions will give you a glimpse into how loyal and committed their advocates have become.

Their weekly contests and open submission process makes it easy for new users to join the community and show off their work. When submitting a design, artists are encouraged to reach out to friends and family for support.

It’s one thing to send a friend a referral saying, “I’ve tried this product, and I love it. I think you’ll love it too.” And another, to reach out to your friend letting them know you entered a contest and you could use their vote. There’s no monetary act, just the simple ask for support.

This ask for a vote is often a user’s first interaction with Threadless. Unlike most companies, there’s still no ask by the brand making the barrier to entry extremely low. From there, the work often speaks for itself, with many first time users creating an account to show support and then spending time browsing through their selection. (Great marketing technique, if I say so myself.).

Threadless hardly ever produces a dud product because their community must cast votes supporting a design before it’s even considered. In essence, their customers produce their products. It’s a marketing strategy called co-creation, which is allowing its audience to be the product developers or designers.

It’s a project manager’s dream. Think about how much easier marketing would be. If every time a new product was created, it already has thousands of potential customers weighing in on their likes, dislikes, and desired final product. Threadless was able to make this their reality – and it paid off.

In 2008, Threadless was named “The Most Innovative Small Company in America” by Inc magazine, though Nickell didn’t disclose revenues for the article. Inc. estimated $30 million in sales and a 30% profit margin. By 2017, Threadless begin acquiring other design companies such as Bucketfeet, a shoe company specializing in artist-designed footwear. Ever-expanding their crowdsourcing business model, Threadless prints can now be found on posters, water bottles, home accessories, shoes, and much, much more.

Threadless is all about community, so unless you’re a long-time customer or a new user showing support for a friend. Chances are you probably won’t bring up Threadless in everyday conversation unless someone asks you where you got your sweet shirt from. But that still hasn’t stopped 10’s of millions of people from buying shirts from local artists around the world.